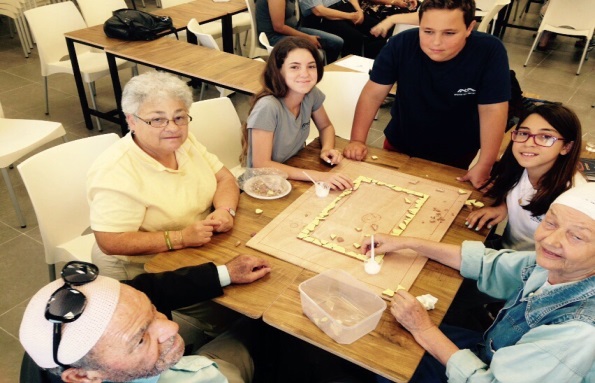 The Founding Families of Bekaot Need YOU today!
Tuesday, September 12, 2017

Rachel hands out cookies to her grandchildren as she sits hunched over in a big armchair with her walker parked carefully next to her. When you look past her silver white hair and wrinkled arthritic hands, you can still see the young idealistic woman who came to Bekaot over 40 years ago.  She came with her late husband and young children with the dream of turning this arid piece of desert into an oasis. It was a difficult task making anything grow from the dry dusty soil, but like all of Bekoat’s founding families, they toiled with love and made the desert bloom.

In the early 70’s this expansive piece of land in the Jordan Valley attracted people who wanted to till God’s soil and make it fruitful and bountiful. One of the oldest Jordan Valley communities, Bekaot was established in 1972 as an agricultural community, a place where pioneers could settle the Biblical heartland, bringing forth fruit, and living in peace with their surroundings.  Unfortunately, over the years this volatile area has seen its share of violence disrupting their tranquil lifestyle. There was a period when the army checkpoint just outside of Bekaot was the scene of tragic suicide car bombings, terrorist shootings and several foiled terrorist attacks.

Harsh conditions and violence did not deter residents from settling this land, and raising their children here. The community of Bekaot, meaning “valleys”, takes its name from a verse in Deuteronomy 11:11 – 12 “is a land of hills and valleys, and drinks water of the rain of heaven: a land which the Lord thy God cares for: the eyes of the Lord thy God are always upon it.”  The people of Israel are promised that the land of Israel which they entered is not like the land of Egypt which they left. The residents of Bekaot feel that the eyes of God are on them in this very special piece of His land, and they take the responsibility to care for it very seriously.

The almost 200 residents who live in Bekaot today are determined to stay, determined to continue their parents’ legacies and rejuvenate their community by bringing in new young families with their fresh, energetic pioneering spirits.  In this respect, Bekaot is unique in that almost half of its residents are young men and women who were raised on this farming cooperative and have returned because they wanted to give their children the same values and quality of life they had growing up in the Jordan Valley.  They have integrated themselves in the area, and have become an invigorating influence on the local atmosphere as they involve themselves in the further development of the community.

In the community there are nearly 40 residents like Rachel who have already reached their “golden years”. They are the first generation of senior citizens living in the community. Recently Bekaot has wanted to invest in this treasured segment of their population. After all, these are the people who literally paved the way for the younger generation to be living there today. If it weren’t for their hard work and determination all those years ago, who knows if there would even be a Bekaot as we know it today? The community has partnered with the regional community center, and the municipal social services department to open a local senior center.

The senior center will be open every morning so that seniors have a place to go, rather than staying home alone. The community has already designated a building for this wonderful center, but they have no funding for programming and activities. The community is now turning to you, for help with the cost of lectures and creative workshops for the seniors. This gift would improve quality of life for Rachel and others like her living in this rural community. It will give them reason to get up and out of the house each day.  Just imagine the joy on their faces as they gather with their friends and neighbors sharing a meal, listening to an interesting lecture, or knitting booties for a new baby in the community.

The pioneering senior citizens of Bekaot are rooted in the soil, emotionally and physically. They are connected to their vineyards, orchards, and crops of dates. They have invested so much in this piece of God’s land. Will you please consider being a blessing to these men and women who have given so much of themselves to this holy land?