A Community that Camps Together Stays Together!

Every year the entire community of Leshem, where I live, goes on a one night camping trip at the Sea of Galilee.  A group of volunteers organizes the entire trip. This year the trip was set for the 15th day of Av (July 26th),  the Jewish version of Valentine’s day, so the theme of the trip was LOVE.

Before the trip began, a surprise kit was dropped off at our door, containing matching red T-shirts for each member of our family, a music CD with love-themed songs and a riddle which when solved directed us to our first stop. I must confess, camping is not my favorite past-time and the thought of sleeping on an inflatable mattress in a tent, on a hot and humid night in the hottest and most humid place in Israel, is not what I would call fun. But every year my kids manage to convince me to go 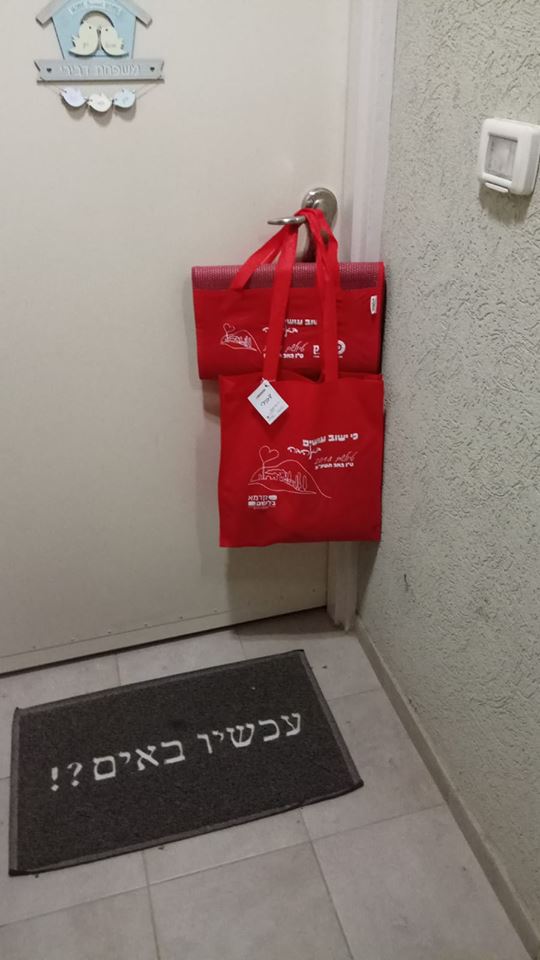 on the trip and we have joined the camping experience for the past three years.  As we left Leshem I wondered if I would enjoy it or if the discomfort would ruin it for me.  I hoped it would be fine.

We left at around three o’clock on the Sunday, all dressed in our new red t-shirts, happy and excited to go on this great adventure. We drove up north crossing the Jordan Valley, stopping in the community of Gitit to pick up the clue for our next stop, then on to Mechola where the kids all got popsicles to cool off. At 16:45 we arrived at the Sea of Galillee. It was amazing to see more than 800 people, all from Leshem, in red shirts putting up their tents and unloading the cars. You could feel the excitement in the air. All the children were called to the common area for a magic show and they each got a box of popcorn and a slushy. Looking at them you could see how mesmerized they were by it all. While the kids were busy we, the parents, sat with our friends sharing our tales from the road and enjoying the serenity surrounding us. 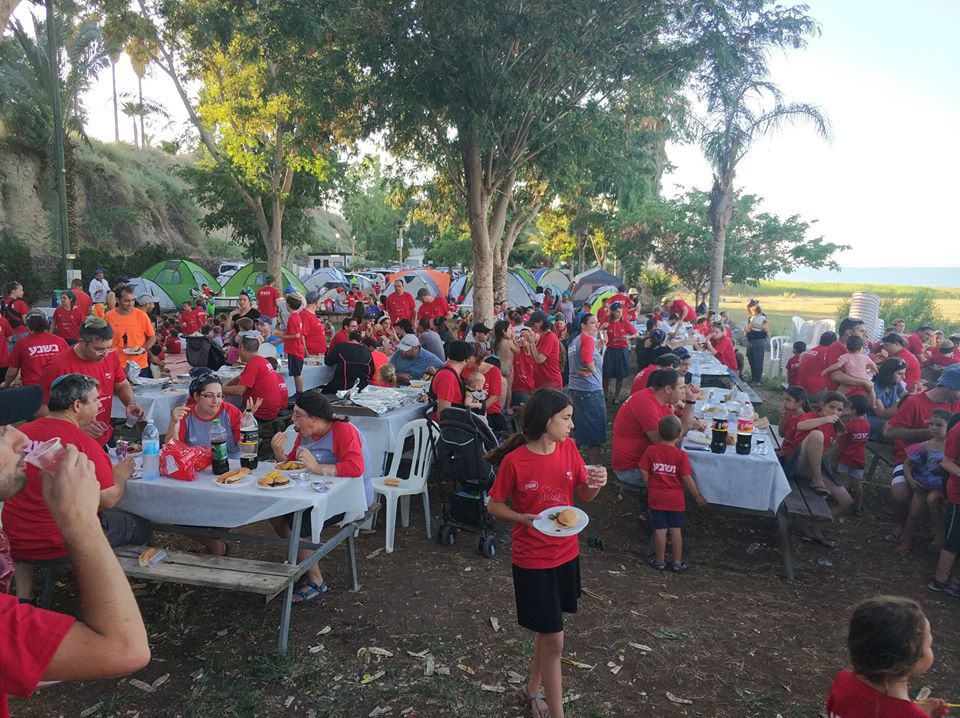 After the show we all sat together as a family for a BBQ dinner that was prepared and served on the beach.  The air was filled with sounds of laughter and happiness and the food was perfect and delicious. Soon after that, before sunset, my husband and I took the kids for a quick and cool dip in the sweet waters of the Galilee. The water was cool and it was nice to swim and play around with our beautiful children. It was a great opportunity to teach the kids about the importance of the Sea of Galilee as the largest natural source of fresh drinking water in Israel. This past year there was not enough rain and the Sea has shrunk terribly because of over pumping. We also talked about the changes in its size over the years and the children tried to think of ideas how to save our one fresh water lake.

Stories around the campfire

As the sun came down and it became dark, most of the little kids went to sleep, of course after much argument, and the older ones sat around a camp fire listening to scary stories, roasting marshmallows and sharing heroic tales of their childish mischief. Despite their efforts to stay up all night, one by one the children fell asleep and were taken to the tent by their parents.

Enjoying the peace and quiet we sat with our friends talking and laughing until the middle of the night, as if we were teenagers. When we finally went to “bed” my husband was so tired that he was out in less than a minute. I, on the other hand, was laying on my inflatable mattress waiting for the sun to come up, I had all these thoughts about community and unity and I was just too hot to go to sleep …. I must have fallen asleep at some point because my children woke me up at 5:45 AM. I had three minutes to stretch before they pushed me out of the tent and begged me to take them to the bathroom.

The next morning brought a new day filled with activities and surprises. It began with a wonderful breakfast and was followed by a game of tag on the sandy beach. After the games everybody ran into the water to cool off, having a great time. It was amazing to see more than 800 of our neighbors and friends swimming in the Sea of Galilee, enjoying the hot sun of Israel and just bonding as a community. When it was all over, the gear was repacked and loaded in the car and we were on our way home, I admitted to my husband that the trip was actually not too bad and that I really did have fun. The kids asked if that means we will be joining again next year.  I promised to think about it over the next year and then give them an answer.

Now, while I sit in the cool air-conditioned office, I think back to the trip and feel really blessed to be a part of such a wonderful and unique community:  a place that treats its members as family and works hard to preserve unity despite its unbelievable growth. Even if it means I have to sleep in a tent for one night, once a year, it is definitely worth it to be a part this magnificent community.