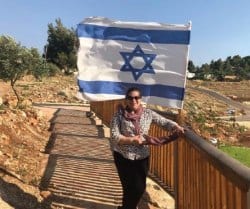 There is little else more exciting than embarking on a first-ever trip to Israel aboard a flight full of Jews making Aliyah to Israel. The inability to keep exhilarated grins off of faces, the nervous energy of young children itching to taste the sweet Israeli air, and the atmosphere of deep and almost intoxicated anticipation is infectious. Excitement wafts throughout the airplane like the aroma of freshly-baked pastries, and no one aboard is immune to it.

Pastor Becky Keenan was no exception.

As a guest of Nefesh B’Nefesh on one of their charter flights for new immigrants to Israel, Becky Keenan and her husband Joe made the most of their first plane ride from New York to Tel Aviv’s Ben Gurion Airport in 2010. Becky moved about the cabin and spoke with almost every passenger, asking them why they were making Aliyah, and engaging them in conversation about their decision to fly halfway across the world to live in a tiny slip of a country in the Middle East.

“Every single passenger,” says Becky, “said the same thing: ‘We belong there. It’s our home.’ It didn’t matter where the passengers came from, they were all united by their belief that they were returning, at long last, to their Homeland. They believed they belonged,” Becky tells me. “And they did.”

Two things stand out to Becky when she remembers that fateful plane ride. The first was the prevalent sense of community aboard the airplane; it was full of people who had never met one another, and yet no one was a stranger. The unity of their purpose – to return to and live in Israel – made them into a family.

The second thing was the individual responsibility that each Jewish immigrant seemed to carry on their shoulders. Every Jewish passenger on that flight had taken it personally upon themselves to see God’s centuries-old prophecy to Abraham come to fruition – “All the land that you see, I will give to you and your children until eternity.” Retirees, parents and young children, and college graduates preparing to enlist into the Israeli Defense Forces – personal responsibility had brought all of those passengers to Israel. And personal responsibility is what makes Becky Keenan keep coming back to Israel again, and again, and again.

Love of Israel was something that Becky acquired early on in her life. She was born in Germany and lived in Puerto Rico from ages 5 to 18. As a child, Becky’s father, a US Army veteran who served in World War II, took pains to ensure that Becky understood the deep significance of the Land of Israel, both to Jews and Christians. In the War, Becky’s father had fought for the values of freedom, liberty, and justice, and Becky knew that those were the selfsame values that the State of Israel had been founded on. “We are natural allies,” she says. 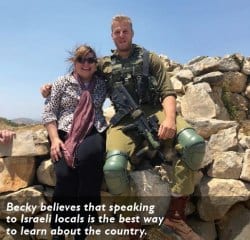 Becky believes that speaking to Israeli locals is the best way to learn about the country.

On her first trip to Israel, Becky connected deeply with the land and the people of Israel. Right from the outset, the spiritual weight of the Biblical Homeland was apparent to her, and she immediately understood the depth of the relationship between Israel and the Jews. She saw firsthand how the return of the Jewish People had made the stony hilltops and desert areas flower. To Becky, it was clear that Israel had been waiting centuries for her people to return to her as God had promised. “The State of Israel was not a gift from the UN,” says Becky. “It was a gift from God, and it belonged to the Nation of Israel for a long, long time.”

On that same trip to Israel, Becky met Sondra Oster Baras, CFOIC Heartland’s Israel Office Director. A quick but emotionally-loaded meeting in a hotel lobby grew into an amazing relationship ever since. Upon her return to Texas, bursting with the beauty of the land and excitement and revelation of her trip, Becky became determined to help Israel. She understood for the first time just how skewed the world’s perception of Israel really is. This disturbed Becky greatly, because she believes that those misguided opinions affect the younger generations and sour the relationships between Israel and its allies.

Joe and Becky Keenan pastor the Gulf Meadows church in Houston, Texas, a bilingual congregation. After that first trip to Israel, Pastor Becky began to initiate serious education in the church for Israel. She hosted the first Night to Honor Israel in Houston and invited Israeli speakers to the church. A favorite visitor and speaker for several years now has been CFOIC’s Sondra Baras. In addition, Becky decided to start bringing her own groups to learn about Israel, to expose them to the real facts on the ground, and to combat misinformation.

On her Educational Journeys through Israel, Becky encourages participants to think independently. “I don’t insert my opinion,” she says, “I allow the facts to speak for themselves.” In tandem with CFOIC Heartland, Becky brings her groups to meet locals in communities throughout Judea and Samaria, where she believes the most important lessons can be learned. “I want [my participants] to meet Jewish families, to see their appreciation for family, freedom, and education. In the Jews, with their survival and accomplishments, you can see the hand of God. We can all learn from that.” And there is always more to learn; Becky says that she is still learning about the situation in Judea and Samaria.

When asked if she has a favorite Israeli community, Becky laughs and says, “That’s not a fair question! I love them all. Each community is so different, so individual. They’re full of hope.” Despite their differences, Becky says every resident she meets expresses that same unity of purpose that she witnessed on her first trip to Israel: that they belong here, as Jews, in their Biblical Homeland.

“The Bible is alive,” continues Becky, “because God is alive. He’s alive in Judea and Samaria, and CFOIC Heartland can show you. The land of Israel responds to and protects the Jews living in it, and that is a true miracle.”