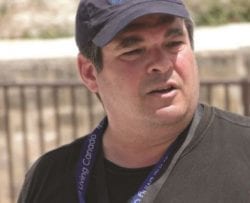 Daniel Ehrlich has been a leader in Jewish and Zionist education for over thirty years.  Today, he guides tour groups all over Israel. Just one day touring with him, and you immediately sense the passion this man has for the Land of Israel and its history.

Danny took his first trip to Israel in the summer of 1969 at the age of 11 years old. He still recalls the feeling he had that summer: “It felt like home.”

Danny married Batya and from the beginning, they both knew they would eventually make Israel their home.  Batya had grown up in Boston, but her ancestors had settled in Israel in the late 16th and early 17th centuries. One ancestor had been the Chief Rabbi of Tiberius. During a time of harsh famine, her family left Israel in the 1920s for the United States.

Finally, in 1996, with three little babies in tow, the Ehrlich family made aliyah. For their first three years, they lived in an apartment in Jerusalem. Later the family moved to the community of Efrat in Gush Etzion, believing that it was vital to the security of Jerusalem. “Just by waking up there every day I was strengthening the Jewish people in the Land of Israel.”

Danny has always felt a strong connection to the history of the land. “Gush Etzion is situated between Hebron and Jerusalem. It sits on the Path of the Patriarchs an ancient artery connecting those two ancient cities. It is where our forefathers walked and where Jewish pilgrims purified themselves en route to the holy Temple in Jerusalem.”

Danny recalls feeling history come to life when his daughter Nili celebrated her Bat Mitzvah in Efrat around the holiday of Shavuot. “On Shavuot we read the Book of Ruth”, Danny explains, “which takes place in Bethlehem, nearby to where we live. It was very meaningful for us to celebrate the occasion close to where the Biblical Ruth and Boaz actually lived.”

Today, the Ehrlich children are all grown up. There is 26-year-old Rafi who was an officer in the tank corps and is married to Malka; Ariel, married to Roni, who currently serves in the IDF and has just signed on for an additional five-year term; and daughter Nili who is currently serving in the IDF Education Corps. Nili teaches Russian soldiers who do not have a strong background in Judaism and Jewish history. She is strengthening their Jewish identity so that they have a better understanding of what they are fighting for.

As immigrant parents, Danny and Batya are very proud of the fact that their children all served in the army. “It as a real privilege that after two thousand years of exile and oppression, the Jews have returned to their eternal birthplace and can now defend themselves.”

Danny’s first encounter with the Christian community dates back to the early eighties. He was invited to join a panel on the topic of “Americans for Israel: How to bring Israel into the home”, and sitting next to him was someone who identified himself as a Christian Zionist, a term he had never heard before. He was fascinated!  Danny continued to connect with the Christian Zionist movement, attending the Feast of Tabernacles events in the 1980s and helping to set up antennas in Israel to broadcast Christian radio from Lebanon.

Danny met Sondra Oster Baras, Director of Christian Friends of Israeli Communities, in the 1990s while guiding. Danny was already living in Efrat, and was asked to become CFOIC Heartland’s Efrat liaison. It was on a speaking tour in the United States where Danny met Margy, President of the US Board of CFOIC Heartland.  For years, Danny would guide CFOIC Heartland Feast tours as a volunteer and always was so enthusiastic about the people he met in the group.  But then work caught up with him and for years he was not available to guide CFOIC Heartland groups.

In March 2016 Danny guided the CFOIC Heartland Israel Tour: From Promise to Possession. “It was like a reunion” he says. “It is great to be with Christians that not only love Israel, but understand the importance of Judea and Samaria.”

Danny relished the time spent guiding the group in Judea and Samaria. He took them to see the Cave of the Patriarchs in Hebron, as well as Ancient Shiloh where the Tabernacle stood for 369 years. Integrated into these attractions were fascinating community visits where the group got to personally meet with pioneers of Judea and Samaria. Danny even hosted the group in his own home in the community of Efrat, enabling them to connect in a more personal way with him and his family.

Danny found the visit to Israel’s Holocaust Memorial Museum, Yad Vashem a particularly meaningful experience for the group. “Christians don’t always understand the difficulty and suspicion that Jews sometimes have towards them. But once they learn our history, they begin to understand.”

“People come on trips to Israel, and aren’t even aware that they’ve been taught anti-Semitism. This includes having been taught Replacement Theology. Coming to Israel is a corrective experience.  They are able to see the Jewish people clearly, and with that they see their own religion more clearly.”