When Missiles Land Too Close for Comfort

Imagine being woken up at 5 in the morning by a wailing and threatening siren whose menacing tone rises and falls with the known signal of impending attack.  It is the same sort of feeling that is experienced by families living near Gaza — those families have been experiencing sirens like this for years.

Every few months Hamas decides to launch a new wave of missiles and artillery fire which sends thousands of families living in the Western Negev to the protection of shelters and safe rooms.  The reality in those communities is brutal and unforgiving and last summer, incendiary balloons were added to the mix as local residents watched fertile fields, almost ready to harvest, consumed by fire.  But luckily and by the grace of G-d, people have rarely been injured or killed by these attacks.  The Iron Dome is poised to shoot down the missiles and the incendiary balloons and much of the artillery fire has fallen on open fields where the damage has been to property rather than to people.

Don’t get me wrong– the people who live near Gaza suffer terribly.  Children suffer the trauma of fear and uncertainty and some have reverted to bed-wetting and other responses indicative of trauma.  And many adults live with ongoing stress.  But when the siren goes off in the Negev, they are never surprised.  The sirens, unfortunately, have become their reality.

But last week, at 5 in the morning, the people of Mishmoret, a small moshav located near Kfar Saba, were woken by a siren as a Gaza rocket was about to land in their community.  No one expected this.  There was no Iron Dome protecting this community.  Some of the residents of Mishmoret were not even sure what they were hearing and many did not have safe rooms in their homes.  They were not prepared.

The rocket scored a direct hit on the Wolf family home and the shock waves caused serious damage to dozens of neighboring homes.  Seven members of the Wolf family, including children, were injured, although thank G-d, none were in a life-threatening situation.  As the siren went off the father of the family managed to get his wife and young children to the relative safety of the protected room, but his mother and older daughter did not make it into the safe room.  There is only a minute between hearing the siren and the explosion to make that run to safety.

Mishmoret was long thought to be out of the range of Gaza missiles.  It is significantly north east of Gaza, actually just west of the “Green Line” that separates it from Kalkilya.  In the early years of Mishmoret, they faced ongoing threats from Kalkilya, located then just  across the 1949 cease-fire line, in the Jordanian occupied West Bank.  Arab terrorists would infiltrate Israel and destroy the crops in Mishmoret and presented a serious threat to the lives of the young pioneers living there.  But after 1967, Kalkiya and the rest of Samaria were liberated by Israel and the people of Mishmoret were safe.  Mishmoret became a quiet suburb of Kfar Saba.

Beginning in 1995, when Israel withdrew from Kalkilya, there were fears of terrorist infiltration from Kalkilya but the terrorists usually aimed their weapons at the communities in Samaria or at local busses and coffee shops in the larger cities.  Mishmoret seemed protected.  And then in 2003, Israel once again exerted security control over the entire area, and built a security fence between Kalkilya and the Kfar Saba area, preventing the terrorists from entering the Kfar Saba area.  Mishmoret felt safer than ever.

I live just a few kilometers east of Mishmoret.  Had that missile strayed just a bit from its intended path, it would have hit the community of Zufim.  A bit further east, and it would have hit my community.  For years, we have been warning people from all over the world of the dire consequences that would ensue to the center of Israel if we were forced to abandon Judea and Samaria.  I have stood on mountain tops in Zufim and Karnei  Shomron and pointed to the communities nestled in the pastoral countryside below — the countryside of Mishmoret and Kfar Saba.  I have pointed out that if we were not here, the Hamas would be here and their lives would be a living hell.  But I never imagined that rockets from Gaza could threaten them, or us for that matter,  as well.

That same afternoon, the mayor of our community put out a directive for everyone to be sure they knew where their nearest bomb shelter was located.  The newer homes have safe rooms inside.  But our home is 35 years old and we rely on a bomb shelter several minutes walk from our home — an unrealistic option in the event of a missile strike.  Suddenly, we faced two threats — missiles from Gaza in addition to the ongoing threat of Arab terrorist infiltration or shooting attacks on our roads.  The smallness of our country suddenly came home to us in a very real way.

Israel cannot afford to compromise on its safety and it is clear that our enemies are constantly improving their offensive capabilities with the express purpose of killing as many Jews as possible.  We must ensure that our defensive and protective capabilities are improved commensurately.  So many communities have turned to us in recent weeks with requests to beef up their security preparedness with updated surveillance cameras, tracking technology and communications devices.  We cannot afford to wait with this.  The needs are urgent and require immediate attention.

The Government of Israel will redouble its efforts to manufacture and position Iron Dome anti-missile devices in many more locations.  That is a job that only a government can do.  But as defense budgets are stretched to the limit, the needs of the smaller communities often fall by the wayside.  And that is where you can make the difference.  I hope you will support our efforts to ensure that every community in Judea and Samaria has the security equipment it so desperately needs to keep their people safe. 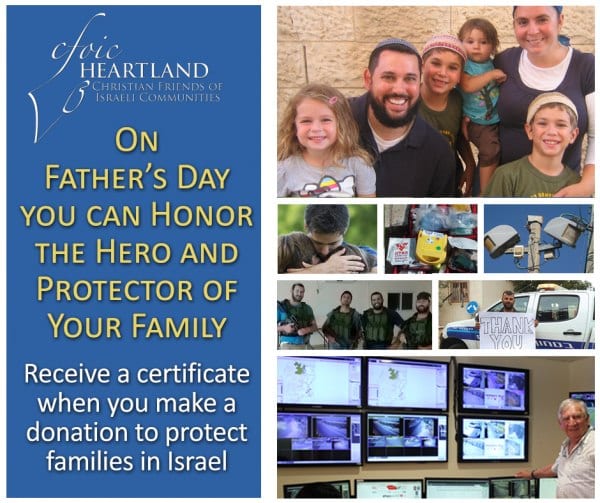